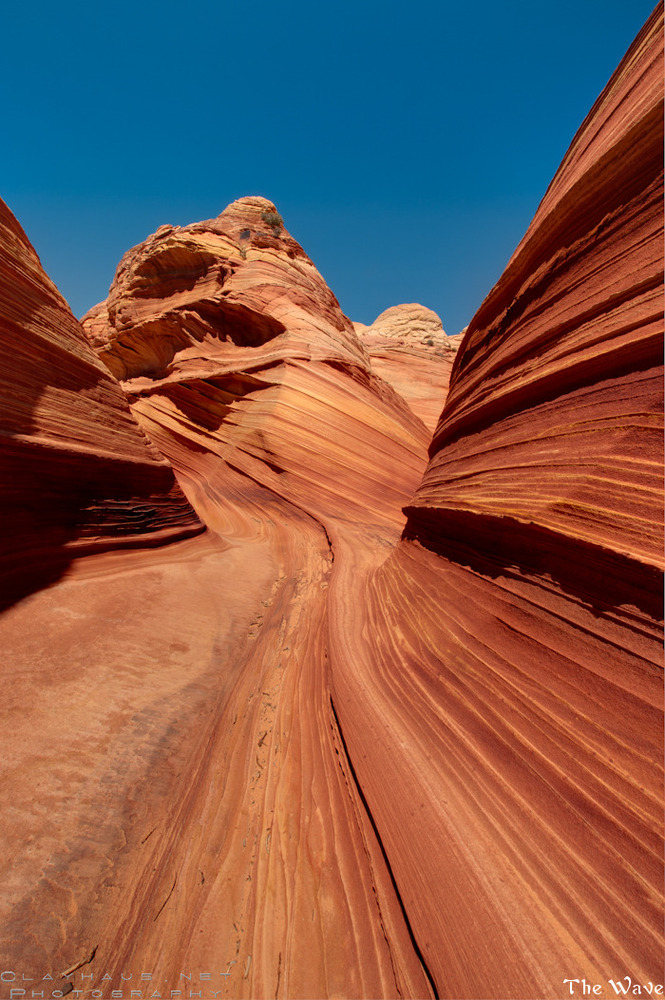 I can think of no greater example of extreme difference in ostensibly similar landforms — with commonality in base components, age, agents of erosion, and location — than White Pocket and The Wave. Both are located in the Paria Canyon-Vermillion Cliffs wilderness, now newly designated as a National Monument, in a remote section of northern Arizona bounded by the Paria and the Colorado Rivers. Both are formations of primordial sand dunes long since petrified and frozen in time, when dinosaurs wandered ancestral seashores occasionally leaving tracks for us to find. Sandstone of muted reds, brilliant oranges, bright whites and golden yellows, the ever-present building blocks of the Southwest, shaped by water and wind (but mostly water), provide the foundation for both landscapes, as well as an exercise in the study of contrasts.

Separated by less than 20 miles as the raven flies, White Pocket and The Wave offer completely different experiences. Since its “discovery” some 15+ years ago, The Wave has become, for the growing legions of aspiring landscape photographers, a “must-see/must-have.” Relatively easy access — 10 miles of the usually very well-graded House Rock Road, followed by a 3 mile, basically level hike over sand and slickrock — would normally contribute to a steady stream of visitors and your classic outdoor Disney experience. So much so that the BLM has implemented a contentious permitting process that allows for only 20 visitors per day. This has been frustrating for those without open-ended dates but pretty much guarantees that once you get a permit you will have, if not a solitary experience, a quiet one. Access to White Pocket is quite a bit different. Another 5 or so miles down the aforementioned road leads to you the first possible turnoff. This will lead up and over Paw Hole which can be nasty-deep with orange sand in the dry season. Further south is another unmarked turnoff in Corral Valley that will bypass the Paw Hole sandtrap but is longer and quite rough in some stretches. Both tracks (really, calling them ‘roads’ imparts a bit more dignity than they warrant) meet up in the middle of nowhere otherwise known as Poverty Flat. At this point, if you are not lost, it’s a good thing, as there are a number of spur tracks that seem designed to lead you astray. The land rises in such a way that only very occasionally will you catch a glimpse of the large white sandstone butte to the east which is labeled White Pocket on the map, but is not exactly the White Pocket you want to explore. Assuming you end up on the right track after Poverty Flat, you still have almost another hour of negotiating sand and rock (but mostly sand) before the “road” leads south around and past White Pocket Butte to end at a wooden fence that seems designed to keep ATVers off of the brittle sandstone but permits desiccated cows access to crap where they please.

Having survived the sandy and at times bone-rattling 2 hour drive from the nearest pavement, now would be time to set up camp and pop a cold beer, or, better yet, go exploring with cameras in tow.

(Part II: the Yin and Yang of White Pocket and The Wave)