The artistic and cultural presence of the genius known simply as Michelangelo (though, more precisely as Michelangelo di Lodovico Buonarroti Simoni) hover above Tuscany and Italy in a grand, ever-present, all-defining fashion. From Rome to Venice, one can’t help to view his work in churches and museums, to walk streets and piazzas named after him, and to see endless manifestations of David’s groin on countless tacky souvenir kitsch manufactured in some distant Chinese province (where the workers must only wonder at the stuff we buy).

Michelangelo was a giant in his time and since the last of his breath passed some four and a half centuries ago, his shadow has only grown. We all must start somewhere though and Michelangelo’s start was in the very humble village of Caprese (now known as Caprese Michelangelo). Less than 2 kilometers away, we can see from our villa windows, the knob of a hill that is Caprese. The maestro was born within the castle walls and the building still stands. In fact, it is now a museum dedicated to him. Tumbled down and about the brow of the hill are the buildings of old Caprese (while stretched along Strade Provinciale 47 is the more modern town). The 13th church where he was baptized is still used for special events.

The morning we had allotted for touring the little town was a foggy grey and chilled drizzle; the perfect example of what the Irish call ‘a bit of mist.’ The dampness discouraged me from bringing my professional SLR cameras out, but I had just purchased for this trip my first quality point-and-shoot: a Panasonic Lumix LX-7. Given the small sensor size and modest pixel resolution of 10mp, this little camera produces some very sharp images with rich colors (thanks to the Leica lens, in great part). This was the perfect camera to put in my coat pocket, protected from the elements.

The clouds were quite low, in fact we were essentially walking through them. This, coupled with the early Sunday morning time, meant no people strolling about (well, okay: one elderly lady was walking her miniature dog). The quiet mist slowly wafting through and around the grey walls and autumnal trees contributed to a quasi-mysterious ambiance. The castello must never have been that large and once passing through the lone porte but a few wall remnants can be seen. But there, straight ahead is the building of his birth.

The lights are on, but my mood is outdoors, so after I capture a few images I exit and continue around the hill where I come to the little chapel of St. John the Baptist, where the master was baptized. The little plaque on the outside informs me that the building had been de-consecrated for many years but due to popular demand, was eventually brought back into the fold of the Church.

I continued walking on the main — indeed the ONLY — road that circles the hill and though there were plenty of parking places for the tour buses and tourist cars, this being early November meant that I had the right of way with no risk of being run over or of inhaling diesel fumes. Of more interest though were the half-dressed trees reaching skyward through the grey. Occasionally I could see a wall outline above or when looking down, greyish-green depths. Eventually I made my way back to where I began, the pathway into the village.

Though I never saw a piece of Michelangelo’s work that morning, it was special experiencing where it all began, in my own fashion on a rainy-day walk-about. 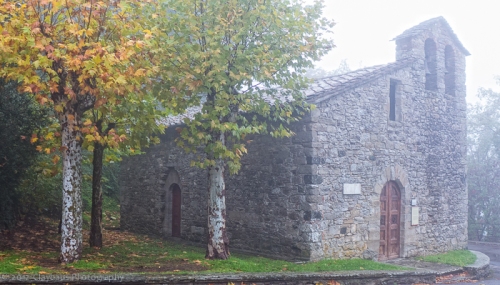 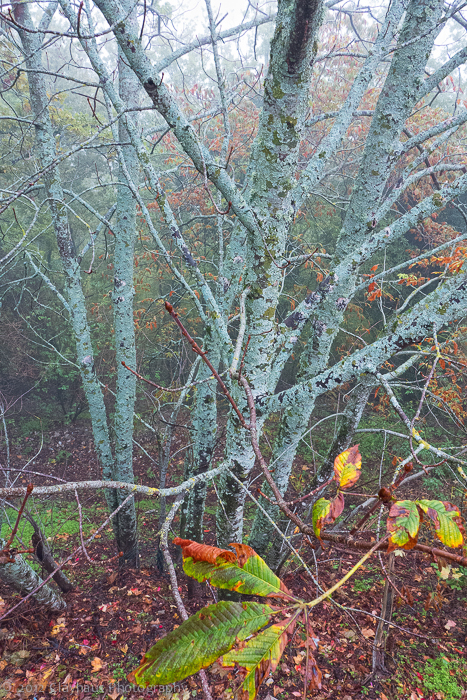 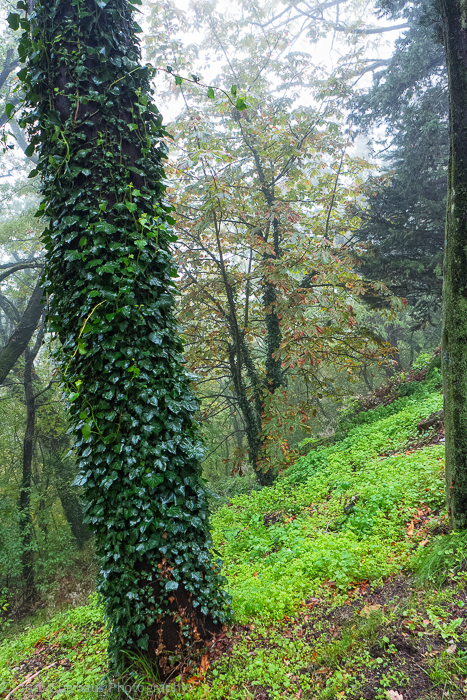