Many are the fruits of the 20th century. Some are incredibly sweet and nourishing, others noxious and off-putting. Fruit is best when tasted at the peak of its ripeness, but guessing that “sweet spot” is sometimes just that: a guess. It may take decades before we fully asses the overall value and “sweetness” of some of the 20th century’s biggest fruits (mobile phones and the combustion engine anyone?). On the sour side, certainly the bitterest, foulest fruit of the past century is its legacy of being the most homicidal, fratricidal, and genocidal in our short history. Oh sure, I know we have been killing each other every since we knew there was an “other” over there, behind the hill, in that valley, and we could wave a stick or bone at. The (ill-)logic of “You are different, hence inferior. Therefore, I am exceptional.” was born early in our infant tribalism. We have yet to outgrow it.

And, the 20th century reeks of it. Whether a consequence of religious fervor or misplaced ethnic/nationalistic chauvinism, ideology run amok or internecine class warfare, the memorials to the millions killed are many. Sometimes you can’t avoid them, even if you try. And, try I often do, when I travel. I try to leave the reality of beheadings and drone strikes, the insanity of school  massacres and illegal invasions, the various unpleasant fruits of our species, far behind me. Keep the TV silent, the newspaper folded and unread…I’m traveling and I don’t want to hear about it! It will all be there, when I return. For now, I just wish to immerse myself — as much as possibly one can in the short space of two weeks — into this land and culture and people that I am visiting. Amen. However, one can find evidence of that murderous unpleasantness wherever one travels (well, okay…maybe not Bhutan, the happiest nation in the world…supposedly), I usually just try and avoid the death camp tours and torture museums. Truly: I get it. I read history and have no illusions. There is much to see and experience and there are just some visions I would rather not carry around the rest of my life.

Nonetheless, after an aborted trip to the Royal Palace (closed for Royal Business, or so the sign said), we piled into our bevy of tuk-tuks and headed off to S-21, the Tuol Sleng Genocide Museum. Our photo tour guide Nathan Horton, did warn us that it would be depressing. It was. But, having already read about it, I knew it would be. It is also recent history. I had just recently graduated from high school when the Khmer Rouge began their bloody trek down the path of stone age agrarianism. Just a few years later the Dead Kennedys would immortalize Pol Pot in their hit “Holiday in Cambodia,” and that same Pol Pot would be on the run from the invading Vietnamese. In between? Four years of genocide perpetuated against their own people. A modern classic example of a revolution eating itself.

As a good tour guide, Nathan gave a short history lesson and most of the group followed him through the four buildings of the former high school. I elected to follow my own path and my own thoughts. You can read many of the details of S-21, or Security Prison 21, in the Wikipedia link above. This one sentence alone should give pause: “Out of an estimated 17,000 people imprisoned at Tuol Sleng, there were only twelve known survivors.” Stalin — no softie when it comes to mass murder — once quipped, “One dead is a tragedy; a million dead is a statistic.” There is a certain sick truth to this. However, the museum does a good as job as possible personalizing the dead: there are thousands of photographs of the inmates-cum-soon-to-be-dead — taken by the Khmer Rouge, as apparently many murderous regimes like to document their ‘work’ — in one of the buildings. I photographed the photograph of one young woman, wondering what went though her mind? What was I seeing on her face? Resignation? Bafflement? Worry? Did she have any idea where her path now lead and how she got on it? Mostly I just felt sad looking at her, long gone but her suffering also long over.

I photographed the buildings and rooms, the beds where inmates were shackled and died. The hallways and barbed wire across openings to prevent suicide attempts. Streaks of light coming through barred windows, scratched and grimy walls, and bright green palms with a blue sky wash above, surreal and incongruous. In the end I photographed one of the last survivors, who has written a book and spends his days at his former torture camp and wondered about what he is seen and experienced and wondered about what he now feels. Divided by language — and an urge to flee — I will never truly know. 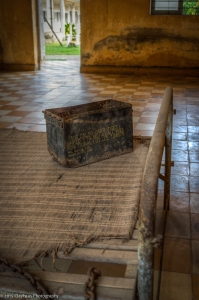 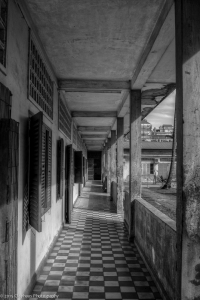 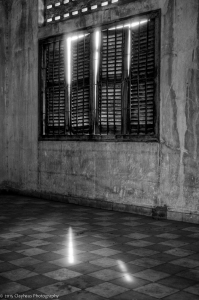 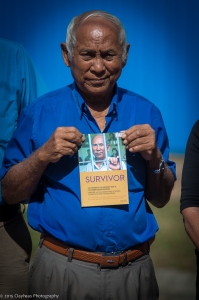 One thought on “Security Prison 21”